Leave a comment Posted by ruffled crow on June 5, 2019

When you’re famous sometimes just doing your job can be tough.

The Grim Reaper, trying to harvest the soul of an aging star named Sean, is interrupted by a mysterious sorcerer…

By the students at ArtFX Ecole d’animation.

Anyone who’s read this blog for a while knows I’m a big fan of Heavy Metal magazine and love animation that reminds me of the illustration and story-telling style of the mag. 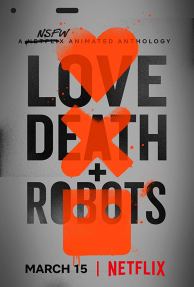 And if there has ever been a television show that ticks all of my boxes, Love, Death, and Robots is it. Different stories throughout the series, different animation styles, all steeped in heavy science fiction. The episodes themselves span the gamut in story – from love to war, and animation style – from simple cartoonish to hyper-realistic.

When I first came across the series I watched three of them before I could stop myself. It took  great self-control to spread the balance of the season over the next week and a half. At 10 to 18 minutes each, it’s far too easy to munch right through the whole season in one sitting.

This show has several strengths, not the least of which is that each episode is animated by different teams from around the world giving each short film a ‘fresh’ feeling all the way through the series.

Three Robots is one of my favorites. Three robots take a tour of a city long untouched since humans became extinct. They come across many odd puzzles and among them is a cat.

In addition, most episodes are based on stories by some of the premier sci-fi authors of our time, including John Scalzi (Old Man’s War series), Peter F Hamilton (The Commonwealth Saga), Alastair Reynolds (Revelation Space), Ken Lui (The Dandelion Dynasty), Joe Lansdale (many books, movies, tv shows, including Batman and Bubba Ho-Tep), Marko Kloos (Frontlines series), Michael Swanwick (various science fiction short stories and non-fiction) and more! I have most of these folks’ books in one form or another.

Most of the script adaptations were done by Philip Gelatt. He’s written or directed several movies such as the Europa Report and The Bleeding House.

I think the iconography deserves a particular mention.

I saw early on how the icons in the opener describes the title; a heart (love), an ‘X’ (death), and a square-headed face (robots). What took me a few episodes to realize is the the icons right before the episode’s title gives an idea of the theme of that episode. For instance, the episode Good Hunting’s icons are a heart (love), a gear (robot/machine), and a fox (uh, a fox) which are alluded to as the film progresses.

I can’t imagine Netflix not putting together a second season, (though stranger things have happened) but the wait, while it may not kill me, will at least cause me great distress.

Leave a comment Posted by ruffled crow on February 11, 2019

Perhaps due to my own certain age, I tend to particularly enjoy the shorts when an older person outwits or non-plusses the Grim Reaper. It’s not an uncommon story, there are a few laying around the crow’s nest here already, and I love ’em.

This animation is also in French – with French subtitles. I don’t know French. There is a lot of dialogue, or at least monologue – in French. Which I don’t know.

And I don’t think it matters. The story is independent of the dialogue and is a fun bit of romp.

From the folks at ESMA.

Leave a comment Posted by ruffled crow on August 2, 2012

Beautifully animated, Backwater is a tale of transition.