Leave a comment Posted by ruffled crow on January 10, 2019

I’ve been sitting on this short for a while now and have watched it several times – so far. I recognize both the man and the monster, being a sometime writer and also a former swimmer. I’ve been in that boat. I appreciate this short for more than just the fine animation.

Created by Joel Best, Alex Jeremy, and Alex Karonis in their final year of study at the University of Technology in Sydney, Australia.

Leave a comment Posted by ruffled crow on March 7, 2013

Havana Heat is a steamy love letter to Good Books in the bodice-ripping language made famous by Mills & Boon books. This short joins the Thompsonesque Metamorphosis in the Good Books Great Writers campaign.

Animated by the duo mcbess and Simon of London-based The Mill.

B is for Bradbury

Leave a comment Posted by ruffled crow on July 1, 2012

Ray Bradbury died the other day, on the sixth of June. I suppose, if one had to be blamed for the existence of this blog, it would be him. For two and a quarter dial-up BBSs and a couple of EZ-Boards too.

I’ve read Mr Bradbury’s books since I was very young and along with Asimov and Clarke, he helped define my daydreams. Mr Bradbury on his own, however, defined how I wanted to tell them.

I’m not sure I had much of a choice about writing; there has always been too many things flying about in my head and many things around me just add more flutterings. If I didn’t write, get things out of my head, I imagine I would drown in the noise. I’m better at quieting and diverting the cacophony these days, but it’s always there.

Anyways, when I started writing, the standard pre-teen and teen angst my peers poured onto their paper seemed like beating long dead horses and no one noticed they were all whipping the same one. Not to say that I wasn’t suffering from many of the same upheavals in biochemistry, but I felt that if you were going to examine the shreds of your pathos in writing then it should be more than a stenographic scream.

So I tried to describe the sinuous beauty of the monsters in my closet and explore the worlds behind their eyes like I thought Mr Bradbury would. Perhaps I hoped for some dawning self-awareness like Douglas Spaulding.

Increasingly I also wrote humor and satire and science fiction and tried to re-arrange words so they had the same sense of wonder Mr Bradbury’s had, the same wide-eyed curiosity and recognition of the macabre, the same ability to smell the approaching rain.

I think I have always understood the power of words, and too often it seems that rather than being the synergistic effect between well-wrought prose and considered introspection it is the bludgeon of the dogmatic or clueless. A verbal savagery that has no respect for the idea or the wielded words. My parents taught me to respect ideas and thought, Mr Bradbury taught me to respect the words that express them.

While written as an admonition to the Grim Reaper, the notation on The Scythe applies to the written word as well: Who Wields Me — Wields the World!

Yes, I’ve published a few things. Hundreds, maybe thousands, of people have read my stuff, but you won’t know my name. And that’s fine. I’ve never pursued a writing career and it’s probably for the best – I’m not that good and would’ve starved decades ago. Even worse, writing is an agonizing process for me; there’s always a more appropriate word, a better construction to a sentence, a finer nuance that I struggle to find. Even if I could complete a novel, the editing process would be horrific.

But I still write and I still try to rake the ideas and thoughts and diversions into piles only to watch an autumn wind rustle them away, with me wanting to follow every one to see where it goes. 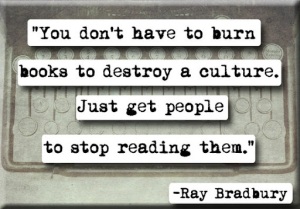 And occasionally there is a sentence, or perhaps a paragraph that touches that place where Mr Bradbury’s writing resides and shouts at me the reason I keep shaping and reshaping clumps of words. For near forty years and millions of words Ray Bradbury was my measure and I suppose my muse.

As he will continue to be.

I never, ever, do any of these things; I only post them so that you, the barely esteemed reader, may avoid these multitudinous errata that oft befall the modern scribe and flock to one’s pen like moths to a china shop.

This first bunch is by Frank L. Visco, originally published in the June 1986 issue of Writers’ Digest

“You can lead a horse to water, but a pencil must be led” – S. Laurel

As an added bonus for especially challenged aspiring wordsmith here is a link to several visual representations of how to wield written language correctly. Heed them. It will save you from annoying hordes of people by either your own egregious usage or the nuisance of wading through the host of grammar nazi posts that always follow.

(go and click that link now. it’s to theoatmeal.com and besides being constructive, they are really quite funny. in fact the whole site is, but for now you should probably focus on learning the rules to the writing road instead of cavorting around on strange websites, as tempting as that may be. just the grammar parts for now and take notes if you need to. go on, this post will be here when you get back)

The results of the 29th annual Bulwer-Lytton Fiction Awards are out and the overall winner is by Sue Fondrie from Oshkosh, WI:

Cheryl’s mind turned like the vanes of a wind-powered turbine, chopping her sparrow-like thoughts into bloody pieces that fell onto a growing pile of forgotten memories.

My personal favorite was the winner in the Fantasy category by Terri Daniel from here in the Emerald City:

Within the smoking ruins of Keister Castle, Princess Gwendolyn stared in horror at the limp form of the loyal Centaur who died defending her very honor; “You may force me to wed,” she cried at the leering and victorious Goblin King, “but you’ll never be half the man he was.”

And for my honorable mention, the runner-up in the sci-fi category by Elizabeth Muenster from Columbia, PA:

Sterben counted calcium bars in the storage chamber, wondering why women back on Earth paid him little attention, but up here they seem to adore him, in fact, six fraichemaidens had already shown him their blinka.

I have written a sentence like that before and perhaps worse.

Find out more about the contest and read more abominable first lines at the Bulwer-Lytton website (where “www” means “wretched writers welcome”) and check out my post on last year’s results.

The Art of Wielding Words

A couple weeks ago I started a post draft on rhetoric intending to link the use of loaded words with the current political dialogue.

Well, I’m still working on it, but there’s been a spot of difficulty.

This weekend I made a push to complete a part of it for final posting. Last week I’d found the post running to a good three pages and the basic idea of the first two bore some more expansion. A couple pages of expansion later it turned out I had several different aspects of rhetoric and the human behavior it involved.

Drifting off to sleep last night I considered why a simple exploration of spin shattered into so many pieces of thought. Granted, rhetoric is a discipline studied for thousands of years by the best minds human civilization could offer, but no one would count me among that number, nor do I have any formal training or education in logic or rhetoric. (not like that isn’t obvious…)

Perhaps it’s just how I write.

END_OF_DOCUMENT_TOKEN_TO_BE_REPLACED

The Why and the How

Leave a comment Posted by ruffled crow on July 1, 2010

Nice to Know I’m Not Alone

The winners of the 2010 Bulwer-Lytton Fiction Contest “Where www means Wretched Writers Welcome.” Edward George Bulwer-Lytton was the genius who gave us the opener “It was a dark and stormy night…”

This years winners do not disappoint.

For the first month of Ricardo and Felicity’s affair, they greeted one another at every stolen rendezvous with a kiss–a lengthy, ravenous kiss, Ricardo lapping and sucking at Felicity’s mouth as if she were a giant cage-mounted water bottle and he were the world’s thirstiest gerbil.

My favorite, however, is the runner-up. It looks and sounds like something I would write.

Through the verdant plains of North Umbria walked Waylon Ogglethorpe and, as he walked, the clouds whispered his name, the birds of the air sang his praises, and the beasts of the fields from smallest to greatest said, “There goes the most noble among men” — in other words, a typical stroll for a schizophrenic ventriloquist with delusions of grandeur.

I swear I’m going to enter this contest one of these days. I can be a contendah!

So here I am, writing again – despite myself. For the size of the posts you would think I said more than I did. I don’t know if it will teach me to be a bit less wordy (I know the library’s blog would appreciate that) but I have a feeling I’ll at least figure out where to put the “Read More…” button if not write a better first paragraph. My apologies ahead of time.

And the biggest problem is ideas – not the lack of them – but keeping the writing of them on track and smaller than treatise size. A piece I began the other day on buzz words in politics has turned into pages exploring rhetorical philosophy. END_OF_DOCUMENT_TOKEN_TO_BE_REPLACED

Leave a comment Posted by ruffled crow on June 6, 2010 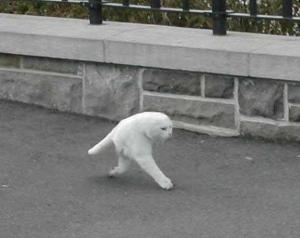 In all too many ways digression is a standard part of my life anymore. The act of seeing the tangent and following it off into odd little alleyways is considered a given since not doing so would create a near intolerable urge. Something like meeting Mr Rogers when your balls begin to itch. Decorum warns against the sack grab but reality notes that you won’t be able to speak an intelligible word until you do. (Now, actual reality in this situation is that Mr Rogers won’t care any more now that he’s passed on, but if he hadn’t and you squirmed enough in your conversation he would quickly ask, in his soft and gentle way, if you had to use the restroom.) END_OF_DOCUMENT_TOKEN_TO_BE_REPLACED