Cover art for The 6 Voyages of Lone Sloan

Philippe Druillet [english link] spent his childhood in Catalonia on the Iberian peninsula of Spain, moving back to France when he was eight. Beginning his artistic career as a photographer, he didn’t start selling his drawings until he was 22 and soon took his most famous character Lone Sloan to the French comic magazine Pilote.

Pilote also introduced us to Uderzo and Goscinny‘s Asterix and several artists that I came to know from the pages of Heavy Metal magazine including Moebius and Bilal. 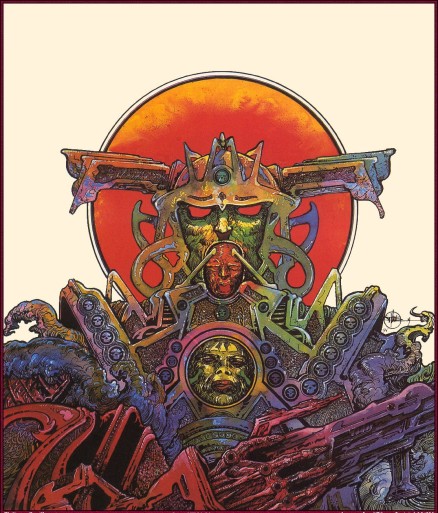 His stories can be somewhat inscrutable; many of his panels might have no text or dialogue and then one will have a large text box full of tightly-packed words.

Story aside, what I’ve always loved about his stuff has been the mingling of eastern, art deco, and art noveau complexities all with a savage, martial demeanor. Rather than small-scene windows into the story, Mr Druillet’s art is wide-angle and complex often given to huge vistas and grand architecture. It’s also not uncommon for his characters to be biomechanoid in some fashion, and his architecture to be rather organic – something akin to HR Giger’s work.

Here are just a few of my more favorite illustrations of his: 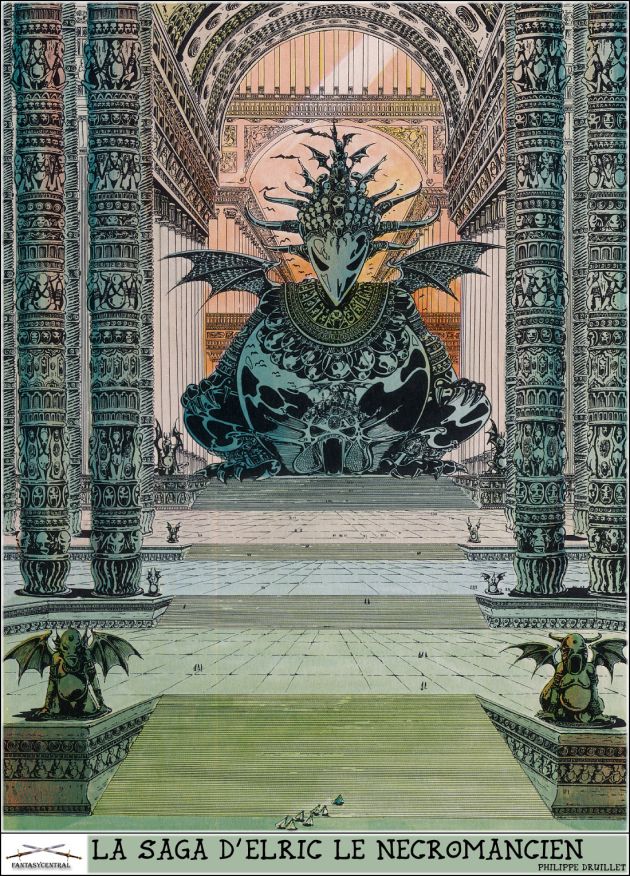 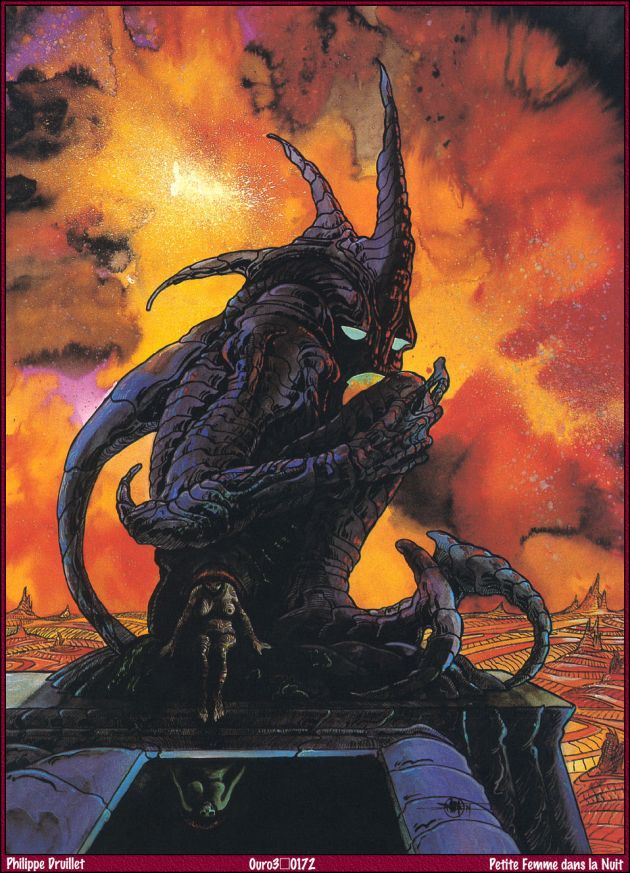 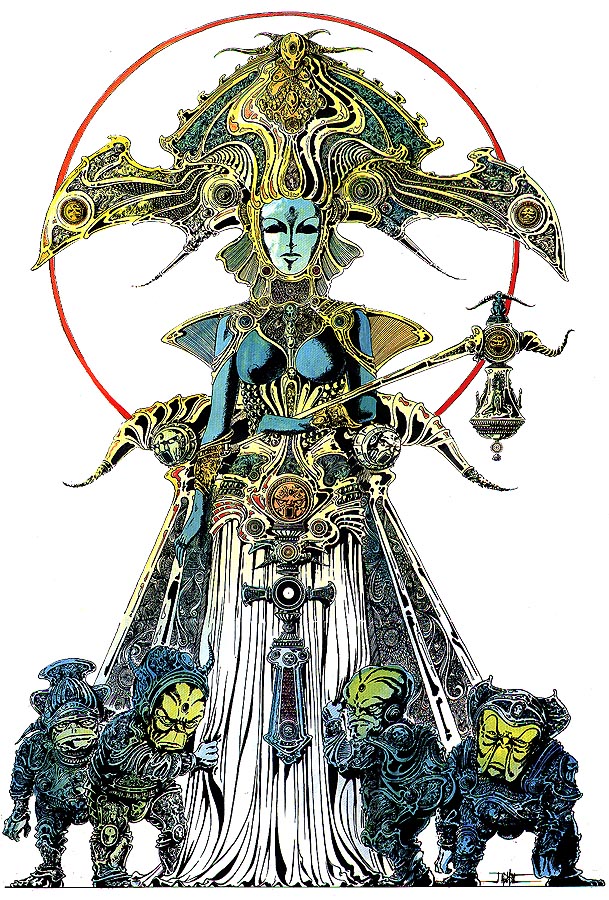 In late 1978 I came across a magazine by the name of Heavy Metal. An “Adult Illustrated Fantasy Magazine”. A comic, really.

HM began publishing in April 1977, the first issue I came across was this one, December 1978

This wasn’t your regular ol’ underground comix though, but some real, serious, art.

I was enthralled and did what back-filling early issues I could. (never got my hands on an issue number 1, though…)

The stories were by some of the best graphic artists and story tellers from around the world: Druillet, Corbin, Moebius, Royo, and Bilal were stand-outs to me in those early issues. New stories and stories written by Lovecraft, Poe, Burroughs, and Milton (to name a few) were interpreted and re-interpreted. The style and colors were as complex and rich as the stories themselves. The likes of Frank Miller, Robert Crumb, and HR Giger have contributed gallery spreads and cover art over the years as well.

From the Heavy Metal Fan Page:

Heavy Metal is a sequential art anthology magazine.  In other words; it’s a comic.  However it’s not the typical comic that most people think of.  […] 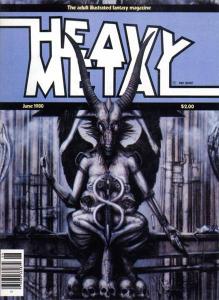 June 80 issue with the HR Giger gallery. This made me a lifelong HM fan. The cover art is a panel from Giger's Necronomicon.

Heavy Metal is mainly an assortment of different graphic illustrated stories, with the occasional article. These can vary in length anywhere from a complete half page story to dozens of pages in one [ED: or more] issue[s]. […]

The stories typically found within are works of Action and Adventure, often in a setting of Fantasy and Science Fiction. However, the stories aren’t limited to that, as you can also find Comedy, Poetry, Documentary, Drama, Horror, Mystery, Western, and just plain Weird.

Usually I have to hunt for new issues – and it can be an adventure. In the beginning the only place to find HM was at a head shop in a small by-way of Pike Place Market, and when that closed a comic store also in Pike Place (Golden Age, I think), none of the bookstore retailers would often carry it at Northgate (though the new magazine stand by the food court has it finally) and a Shoreline 7-11 that I used to frequent unexpectedly carried it for several months. Considering they only carried muscle car, WWF, and various vehicle ‘trader’ mags on that rack, the plethora of porn being behind the counter, I’d bet the appearance of HM was due to a minor minion at the mag distributor thinking it was a music rag.

An Arzach panel by Moebius

And yes, that is the curve thrown. Always check the music section. If they have it, half the time or more they put it there. (I think I’m showing tremendous restraint in not departing on a tangent about clueless people. But I digress…)

Now, I do have a definite bent towards heavy metal music (my iTunes says I have over a week’s straight worth of metal in my collection, second only to rock at 18 days and ahead of  jazz at only five and a half days)  but I don’t need to sift through slicks blaring the likenesses of the newest studded-leather huge-haired Norwegian death metal bands. On the other hand, in its’ more proper spot HM abuts superhero re-hashings and barely intelligible pre-teen mangas. Never mind… It’s a wash I guess…

Fortunately HM can be had via handy subscription, my current method of choice and exceedingly less frustrating. The furthest hunt required is to the mailbox. (and if you wonder when the next issue will be appearing there a simple e-mail answers that. They’re nice folks there at HM)

Besides various changes in publishing schedule over the last 30 years (the time it was a quarterly was particularly brutal, in my opinion) there’s been shifts in format as well. 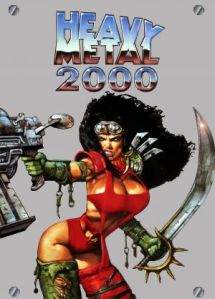 Heavy Metal 2000 Cover. Yes, Julie Strain does look like that. I'll leave it to you to google the pics yourself.

Then there was the HM2k debacle…

I was a huge fan of the 1981 movie – saw it several times and have a copy, and have the issues that contain the stories the movie’s vignettes were based on. It was terrifically awesome seeing those stories come to ‘life’ on the screen.

The magazine itself had been getting pin-up/porn advert laden and the promotions shouted how the main character in both the movie and the accompanying video game F.A.K.K. 2, were voiced by, and modeled on, one Julie Strain. The promotions included photos of Ms Strain dressed in ye olde standard barbarian straps, patches, and cup-for-the-naughty-bits attire certain to send even the most emo pubescent male into fits of boxer short tent making. My initial thought was that there was a casting couch somewhere that was getting a serious workout. Little did I know at the time how close to the truth I was…

Just Gaze Upon the Awesomeness of the Quality Animation! (yes, that was sarcasm if you weren't sure...)

Julie Strain is a former Playboy playmate and actress in several B-grade flicks and Playboy studio releases as well as (drum roll, please) then wife of Kevin Eastman, editor of Heavy Metal magazine.

Topping at over 6-feet tall and built like an Amazon out of a Frazetta painting she wasn’t a bad figure to model the main character “Julie” after,  however when you’re  naming the main character after the real name of the actor portraying them it’s always a bad sign in my experience and this movie didn’t change that opinion.

With animation that constantly reminded me of Saturday morning cartoons, voice acting that packed the exitement of a menu reading, and a story with no ties to the magazine other than merchandizing, I was glad I waited until it came out on video to see it.

But, hey, they were coming out with a Heavy Metal game so it all couldn’t be bad, right? Uh… Well…

Built on the Quake III engine with graphics well done for the day, it was bound to be most excellent. I was getting into Everquest at the time and close-in melee combat was a big plus. In combination with technology and big guns… It was gonna be great.

It doesn’t matter if your shoes have an Italian pedigree, the cat can still puke in them.

Characterized as unfinished or “the framework for a much better game“, F.A.K.K. 2 sent allota cats to alotta closets hunting for a loafer… (and it’s not even worth digressing into why it was so awful. but then this entire hm2k debacle was an awful digression all on it’s own so why should I compound it?) 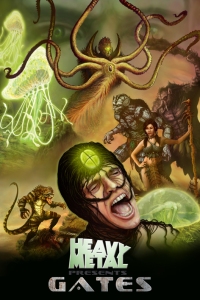 Well, I have stuck with it and things seems to be looking up! Recently Heavy Metal has begun publishing an online comic called Gates by Hal Hefner. It looks great and promises to be a good story too. It’s at page 8 at the moment and a new page is published weekly. It “includes a soundtrack in homage to the 1981 film, Heavy Metal”. (not the newest one? imagine that…) Pretty slick offering and I hope they keep it up.

If that’s not enough, HM has a PDF sample of the current issue available online that looks stunning. Let’s hope they stick with it for the sake of the ebook market.

I suppose all this could be merely sound and fury to distract from a continued degradation of the print magazine itself, but it doesn’t look like it. There is some attempt to include written content – nothing like it had 30 years ago, but every little bit helps, as they say.

All in all, Heavy Metal Magazine remains a worthy read and the forays into online media is welcome and well done.

Join 147 other followers
Follow The Ruffled Crow on WordPress.com