As a teen back in the 70’s I spent a good amount of time prowling the twisted little by-ways of the Pike Place Market. The tourists generally stuck to the open and obvious areas of the Under-Market and if they did wander down the small meandering hall branches beneath the fish market and farmer’s stalls most often they were lost.

And all the better, in my opinion. Back there was no place for tourists. Back there were the tiny artisan shops where niches were filled and cultures were served. Controversial rubbed elbows with the obscure and the unusual. Back there wasn’t so much a different Market, but the essence of Pike Place sensibilities in it’s purest form: local globalism with a craftsman’s eye.

One of my regular stops was a little head shop tucked well away from oft-traveled paths. There, besides the regular plethora of glass and soapstone, were brilliant tied-dyed clothes, psychedelic posters, funky boxes, dragons and faeries sitting on or clutching crystals, and of course, magazines.

And there, courtesy of Fat Freddie’s Cat, I was introduced to underground comix. These weren’t your everyday Superman issue – they were outrageously illustrated and full of sex and drugs (and rock-n-roll too), They not only showed you stuff your parents didn’t want you to see, but poked fun at things your parents took seriously. These didn’t just tip sacred cows – this spun them around a few times, gave em ten bucks in singles, and set ’em up in stage-side seating. Here was a way for cartoonists from the underground newspapers to expand their stories and stretch their art as well.

The Fabulous Furry Freak Brothers, Zap, Fritz the Cat, Mickey Rat, and eventually Heavy Metal. (i’m not sure HM actually fits in as an “underground comix”, but at that time, since it had sex and drugs and was definitely NOT for kids it was relegated to those racks)

And in all those pages I came across the art of Robert Crumb. Certainly the illustration is top-drawer, and I love the way he draws his women, but what reeled me in was the angst. Self doubts, internal turmoils, and everyday demons infuse his work, all cranked up to eleven – I could understand that and still do – I related.

Over the years R Crumb got out of the underground comix biz and he began to pursue more mainstream applications of his considerable talent including album covers and illustrating some of the American Splendor issues. One of his most recent endeavors was the illustration of Genesis, the first book of the Bible.

He married Aline Kominsky in 1978 and they’ve collaborated on several projects over the years, she being a cartoonist in her own right. Apparently, friends of Mr Crumb had noticed a resemblance, in both name and curvature, between Ms Kominsky and a drawing Crumb had done for Snatch Comics #1 depicting “Jail Bait of the Month, Honey Bunch Kaminski” around 1968 (you’re gonna have to google that one yourself) and thought to introduce them. One of their most notable collusive efforts has been a series of domestic tales, called Dirty Laundry, where they each draw themselves. (later along their daughter Sophie joined in) I’ve seen (and may even have — somewhere) several of those comics and it’s striking to see the obvious differences in drawing style within the same panel.

Fantagraphics here in Seattle has published a series of his comics and sketches under the title The Complete Crumb (of course it’s not ‘complete’, but at 17 volumes it’s intensely comprehensive) and Taschen published a limited edition (1000 copies, signed and numbered) Robert Crumb’s Sex Obsessions in 2007. They’re still available and run about $700. Fortunately, for the rest of us they’ll be releasing an unlimited run at the end of next year; December 12th, to be precise. (so depending on which math you use in your end-of-the-world calculations you’ll get it on The Rapture, or a bare week or so prior. In either case, the mere possession of it will insure you won’t be going anywhere. but i digress…)

Robert and Aline have finished their latest twelve-page strip, so this and all of their collaborations will be compiled into one book called Drawn Together. That will be released this fall in France and by Norton in the U.S. at the beginning of next year. This summer, Robert is organizing and compiling his sketchbook pages to be published in an upcoming release by Taschen. It will be in ten volumes, containing the works of his sketchbooks done between 1964 until the present.

That’s via the Official R Crumb Website. There’s alotta stuff available for the Crumb connoisseur to purchase (i think there is a brother-in-law involved here somewhere, so that probably explains that) but with my measly wallet contents I stick to the About pages. And there is a spot well worth an extended perusal. 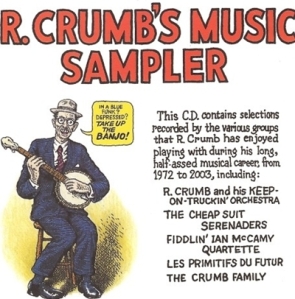 R Crumb and The Cheap Suit Serenaders played 1920's tunes in the way of the day. This CD was given away with The R Crumb Handbook

What I think many folks may not know about Mr Crumb is his long time love of 1920’s and 30’s blues and jazz. To this end he’s not only produced trading card sets of “The Heroes of the Blues“, “Early Jazz Greats“, and “Pioneers of Country Music” but also included a CD of many of these musicians’ work in a book that collected the 3 sets into a single volume called R Crumb’s Heroes of Blues, Jazz and Country.

Besides drawing album covers for many-a old-timey music release, in the 1970’s he formed R Crumb & His Cheap Suit Serenaders and regularly joins Eden and John’s East River String Band on Mandolin. You can catch more of their tunes on YouTube. (its really quite good, imho)

And finally, for a good view on Mr Crumb’s life and work, check out the 1994 documentary Crumb. A good glimpse into the world of a gifted artist.