The perception of ancient China and Chinese art is inexorably entwined with the Ming dynasty. While Ming rule was only a fraction of Chinese history, in the western mind it’s been given free run in film and literature.

In the 13th century Kublai Khan let the Song dynasty know, rather rudely, that the Great Wall just wasn’t doing its job, which was, of course, to keep Mongols like himself out. Unfortunately for the Khan clan, this was about the same time as the Mongol empire was starting to fracture and, for a variety of reasons, was only able to rule China for less than 100 years until a Han peasant monk decided he’d had enough and led an overthrow and established the Ming dynasty.

And what a dynasty it was! Much of the art developed or assimilated during the previous periods were traditionalized by order of the Ming Court. On the down side, Chinese art and culture began to become more isolated. Neo-confucianism, cultural arrogance, and a fear of being re-taken by the Mongols forced the arts to look inward, creating ripe conditions for the re-imagining and refinement of established styles.

A couple of the most recognizable Ming styles is the typical blue and white porcelain (with some green and red, more prevalent in later Ming, though), red and black lacquer and lacquer-ware was re-popularized after centuries of neglect, and personal portraits became vogue for the first time. Scenes of Chinese life became popular as a way to almost ‘re-introduce’ areas of Chinese culture after the Mongol dominance.

With the integration and traditionalization came stylization and a certain amount of simplification. (oh, now that’s a meaty sentence there. hopefully I’ll be able to use it again sometime.) Probably the best examples of that were seen in the furniture; uncomplicated, straight lines or simple curves, latticework to ‘lighten’ the feel, and minimal decorative carving.

Now, all that civilized self-examination had another short-coming besides societal isolation; after nearly 300 years, they became rather complacent and self-certain allowing it to rot from within.

Enter the Manchu in 1644. Literally. In establishing the Qing dynasty, the Manchu recognized the need to keep a better eye on the borders than the previous rulers and, unlike the Mongols, understood the need to retain the prevailing culture and societal structure so they became active patrons of the arts.

During this period, which lasted until 1911, porcelain and pottery colors became more varied and vivid, into the oranges and golds notably, furniture decoration and carving became more complex, western techniques of perspective crept into painting, and multiple materials were more commonly combined into single art objects. Typical household items, such as the black base for vases, the general design of rice bowls, tea cups and tea pots were defined during this period as well.

From a collector’s stand-point Ming art is hugely expensive; at a minimum of 360 years old not a lot survives so there isn’t much of a glut in the market. Qing dynasty art, especially 18th and 19th century items, look like bargains in comparison. Still, only the odd item scrunches inside my budget.

And here we come to much of the point of this entry; A Qing wedding cabinet I picked up a few months ago at a local consignment shop. Just so we’re clear here, I bought the cabinet because I fell in love with it instantly – I doubt I will ever sell it, so I’m not terribly interested in it’s monetary value. I just want to know what it is.

I did my homework before I went back and made an offer on the piece and have done some more since. As I’m not a historian nor anywhere near expert in Chinese art I can’t say with certainty that the wedding chest is truly what I think it is, but all I can find leads me to believe I’m at least trampling in the right garden.

All the store owner knew was that the owner, an Iranian woman, had owned it for some years. Construction and style is consistent with the time, as is wear. I’m guessing it’s around 150 to 250 years old.

I have seen pictures of 2 other cabinets almost exactly like this one, one of them 170 years old and the other 150, however I only include those as small data points and not necessarily applicable to my item, I’m looking at style and construction as the main determinants.

At minimum, it’s old, the patina is finely crackled in places on the back. Wear of the wood is consistent. Construction style of the joints, hinging, finish colors (red lacquer outside, yellow or clear interior and back), and style are consistent. No nails, and the central latch plate and the drawer pulls are hammered metal. The only curve ball is the thickness of the finish; 19th century cabinets have a thinner coating while 18th century have thick coats that is evidenced by some chipping at the edges. Mine has thick with chipping but I can’t be sure that it hasn’t gotten a second coat of lacquer (outside) and/or varnish (inside), ergo the wide age estimate.

Let’s take a look at the beauty:

Now she is not perfect by any means, but she has been kept up over the years and is still solid and study. You can see the crack down the right door that extends through the ring and the bird carvings. No doubt that’s from wood shrinkage. Also the bottom 2 butterflies at the corners are probably not originals.

The configuration of a wedding cabinet is fairly standard as I read it beginning with two external drawers under the double doors.

Two shelves inside with one shelf containing 2 drawers (no, those are not antique blankets in antique plastic zip-ups. stylistically perhaps, but chronologically – no.):

And a nifty “secret room” trapdoor into the space between the external drawers:

The decoration is exactly what you’d want on a cabinet containing important household things for your newly wedded circumstance. At the 4 corners are Butterflies to signify love, prosperity, and long life: 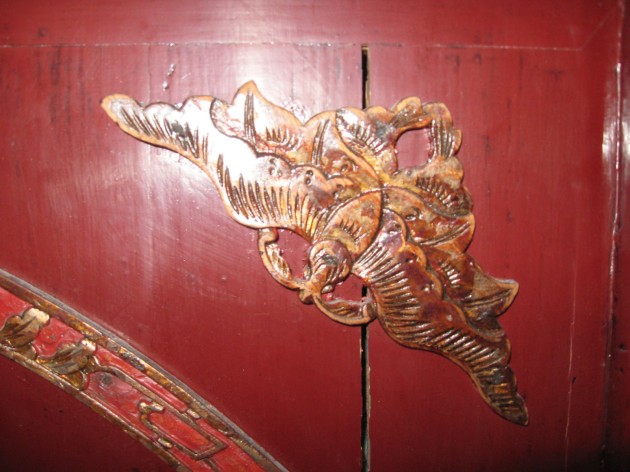 Center top of the doors is a Lotus representing purity:

And flanking the center plate are are Phoenixes symbolizing The Five Human Qualities: Virtue, Duty, Correct Behavior, Humanity, and Reliability:

I thought at first they could be magpies, which signify joy, especially of marriage and children, but the crest flowing from the top of the head is consistent with the Phoenix, which is also quite apt in a marriage, in my considered opinion.

Putting it all together: 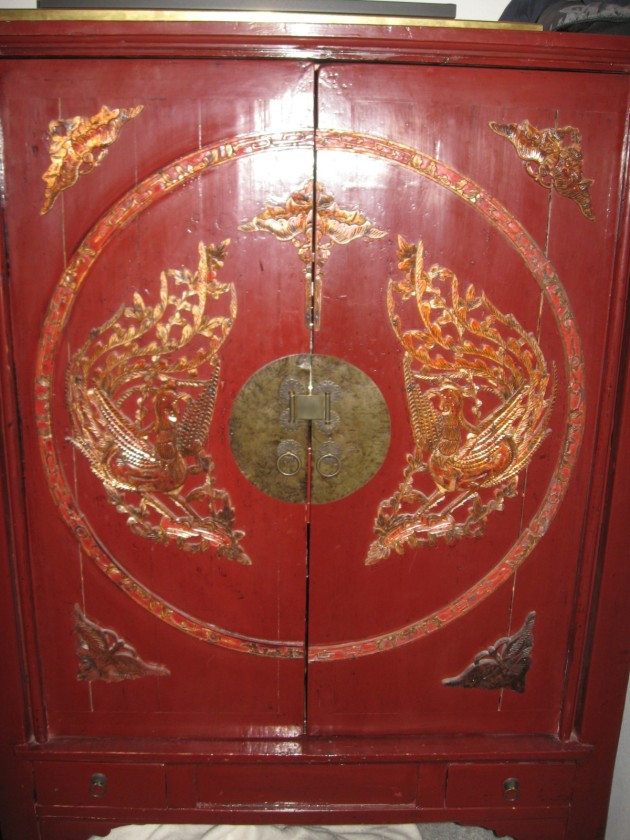