Leave a comment Posted by ruffled crow on November 29, 2011

Holiday traditions are as common a part of families as the odd Uncle. Everyone has one or more, and they’re all different.

We added a new tradition this year in the form of an additional turkey.

Around the abode, we’ve always had a soft spot (whether in our heart or head is in dispute) for so-called bad movies. Wolfman Mac’s Chiller Drive-In and Off-Beat Cinema are Saturday night staples and we have a decent personal stash of some of the better of the so-bad-it’s-good, low-budget, and cult cinema. (dark star and rocky horror are particular favorites…and we have wedding reception photos to prove it)

The additional turkey added to our Thanksgiving tradition menu was the first annual holiday viewing of the 2009 cheese reel Thankskilling.

Timely to the holiday, this very low budget teen slasher brings to the screen one of the more nefarious (and quotable) killers put to celluloid in recent times; a cursed (and cursing), immortal, homicidal turkey that kills with a ceremonial gold-headed ax. Oh, and he talks, and he can drive, and shoot a shotgun, and he can… uh… well… Let’s just say that an extra-small gravy-flavored condom wrapper was found at the scene of a killing and leave it at that. All that on a budget of 3,500 bucks. 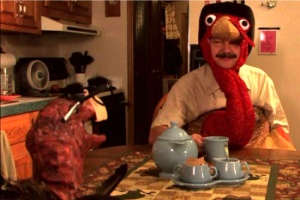 Sheriff Dad and Turkie (in disguise) having tea. This doesn't end well...

The movie opens in 1621 following a puritan lass (in a most un-puritanical outfit) running from an ax wielding turkey. Considering the state of dress, and the …amplitude… of the lass’ heaving chest (which is attached to adult film star Wanda Lust) I worried that the flick could devolve into the interminable, but when Turkie commented on said chesticles my fears calmed considerably.

Jump to the present. (or hereabouts – the math doesn’t work real well in this movie) The jock, the goody-two-shoes, the fat hick, the slut, and the super-dweeb all pile into the Jock’s Jeep to travel home from college for Thanksgiving break.

No, that's not the Sheriff, even though that is his distinctive moustache. Turkie is a master of disguise.

Unknown to them, a crazy hermit’s dog pees on the wrong tiny totem pole (in the woods) that wakes up a 505 year-old cursed turkey which, understandably pissed at the way he’s been awoken, promptly goes on a killing spree that somehow involves the five college kids.

As the kids begin getting picked off, they search a big box of books in Sheriff Dad’s garage and find the book that explains how to remove turkey curses except (gasp!) most of it’s in code! Grisly impersonations, nuclear waste, bad jokes, and  over-the-top quotability will easily make this movie an extra Thanksgiving turkey tradition in our household.

(there’s even tell of a sequel in space! yeah, yeah. kinda a spoiler, but you didn’t think a cursed turkey was gonna go down easy, did you?)