Curling: The Art of Throwing Rocks

Leave a comment Posted by ruffled crow on November 20, 2011 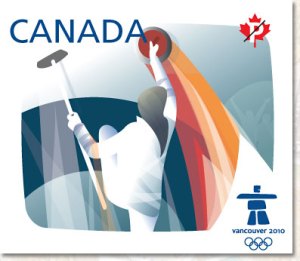 I’ve been a big fan of Curling for a long time. Even living relatively close to the Canadian border, not alot of Curling is shown on TV except during the Winter Olympics, and even then it’s often at odd times of the day or night. Now, I could moan and snark my way through a complaint or three, but the truth is that I’m actually quite fortunate and it’s my own damn fault for not getting my fill of the sport.

I live just over a mile from the only dedicated Curling rink on the west coast. 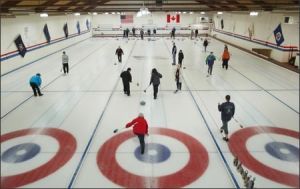 Granite Curling Club has been around since I was a kid (1961 per their website) and is housed in a rather nondescript building a block off Highway 99 in north Seattle. Bounded by a City Light storage yard and miscellaneous light industrial buildings you’d hardly know it was there were it not for the usually-packed parking lot. 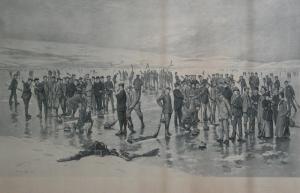 The rink has a tightly packed calendar during Curling season, which runs about October to March, and includes leagues and ‘Bonspiels’ (competitions between curling clubs) as well as private events and open-houses.

Aunt Bee and I have stopped by to watch a few spiels (huddling against a convenient surface; there’s a lot going on and we have yet to venture upstairs) and I keep toying with the idea of attending an open house. I’m not sure either them nor I are ready to put me on the ice, but eventually I’ll probably work up the courage to grab a broom and throw a rock. 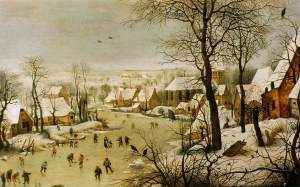 Winter Landscape With a Bird Trap by Pieter Bruegel (1565)

The sport of Curling has been around since at least the 16th century, and leave it to the ‘whack-a-tiny-ball-with-a-stick-into-a-hole’ Scots to create a ‘push-a-rock-around-on-a-frozen-pond’ game. Often called “The Roaring Game” for the sound the rock makes passing over the pebbled ice, the name “Curling” comes from the word “Cur” or “to grumble”. (although there is a bit of dispute here with some claiming that the name comes from the ‘curl’; the movement of the rock at the end of a throw. i don’t think so, however, as in early games the rock sizes were highly variable and the thrower had control over little more than the ‘weight’ of the throw. but i digress…) 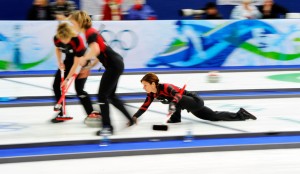 Two teams, each of four players, take turns sliding heavy, polished granite stones, also called “rocks”, across the ice curling sheet towards the house, a circular target marked on the ice. Each team has eight stones. The purpose is to accumulate the highest score for a game; points are scored for the stones resting closest to the centre of the house at the conclusion of each end, which is completed when both teams have thrown all of their stones. A game may consist of ten or eight ends.

The curler can induce a curved path by causing the stone to slowly turn as it slides, and the path of the rock may be further influenced by two sweepers with brooms who accompany it as it slides down the sheet, using the brooms to alter the state of the ice in front of the stone. A great deal of strategy and teamwork goes into choosing the ideal path and placement of a stone for each situation 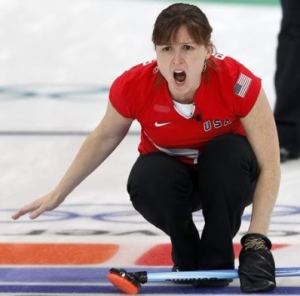 To learn more about the game that literally rocks the house CurlingBasics.com is a great place to start. It’s heavy with Flash animations showing basic shots and strategies as well as rules and club links. To find ice and rink locations around the US check into Kansas City club’s Locator map. Their website’s worth a browse as well.

And if you can’t get enough Curling, you can always play online!

Be sure to check out my previous post on Curling. It includes a How It’s Made episode on Curling rocks!