Around our house the first weekend in August is our All-Star weekend, the annual game seven of our World Series. On Sunday, no plans are made, the big screen is turned on and turned up and only one program is on. The Hydros.

These were the monster trucks and sports heroes of my childhood. With a bit of board, maybe a few nails, and a yard or two of twine we had a Thunderboat trailing behind our bike. Spike nails on the back edge and we had a roostertail made of sparks.

Growing up in the north end of Seattle I could hear the growl of the engines from Green Lake, three miles away. Often-times friends and I would walk down to the lake to watch, or we’d cage a ride from one of our parents. 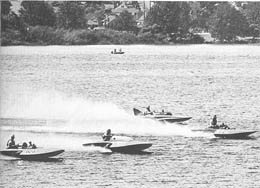 Green Lake is a natural race course; roundish, Duck Island in the middle, and ringed by nice open areas to spread your blanket and watch the rooster-tails go by.

On July 20, 1929, at a time when water sports are becoming the fastest growing sport in the country, the hydroplane craze hits Green Lake. For the next half century, hydroplanes hurl their roostertails around the lake.

The Green Lake area has always been a nightmare to drive around, and it’s a considerably deeper level of hell if you want to actually park.

Unfortunately, that attendant traffic, parking, and noise, didn’t sit well with the Green Lake neighborhood folks and with the death of a baby Snow Leopard at nearby Woodland Park Zoo attributed to the engine noise, the hydroplanes were banned from the lake in 1984.

But the big boats, the U-boats, they were on Lake Washington.

It’s impossible, if not in violation of several laws of propriety, to get this far into a reminiscence of Seattle hydroplane history without mentioning the Slo-Mo-Shun boats. 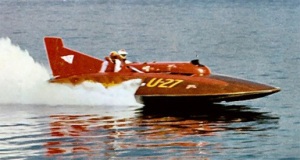 When I was very young I used to watch a local kid’s show called King Klubhouse (on KING channel 5. i still walk around singing walking in my winter underwear every time it snows) with Stan Boreson and his Basset hounds Slo-Mo and No-Mo. (there actually was a boat called the nomoshun. it was a rowboat) Even at that tender age I knew what the dogs were named after.

Stan Sayres put Seattle into the center of the hydroplane map in 1950 by setting the world speed mark of just over 160mph on Lake Washington in Slo-Mo-Shun IV. Two years later Sayres did it again raising the mark to over 178mph.

Over the next decade, the Slo-Mo-Shun IV and V, designed and built by Ted Jones and Anchor Jensen, dominated the hydroplane circuit.

The important difference between the Slo-mo’s and the previous prop-riders like the My Sin resulted from the elimination of the rear-planing surface. The third riding surface was actually the propeller, which cut the drag tremendously and permitted much greater speeds.

Bill Muncey and Miss Thriftway. Considered the best driver ever, Bill died in a blow-over in the 1981 World Championship race in Acapulco

Big V-12 Allison and Rolls-Royce aircraft engines left over from WW2 put the thunder in the boats and drivers like Bill Muncey, Billy Shumacher, and Chip Hanauer did their best to keep the lightning under control.

And control wasn’t easy; these monsters walk the edge between boating and flying. Over the years I’ve seen plenty of blow-overs and the odds were not good for drivers for much of that time. When a hydro blows over it tends to land on it’s top. Yeah, that’s where the driver sits and if he didn’t get thrown clear… Even if he did get thrown clear, was he conscious or disoriented… or driven over? 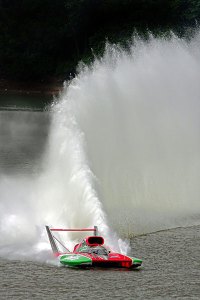 Fortunately, innovation has been applied to the hull as well as the engine, and while Hydroplane racing is still a very dangerous sport, driver safety is taken seriously. The old step hulls split into the more stable pitchfork hull, a skid fin was added to the left sponson to allow tighter turns (and fewer skitters off the course and into the crowd), and finally the low-slung enclosed cockpit was added. Another adaptation from the aircraft industry, the enclosed cockpit was a major modernization and has saved the lives of countless drivers. After the Miss Budweiser debuted it in 1985 it took only a few years for it to be adopted sport-wide.

Accurately or not, in my mind there are really only two spots on earth where Hydro racing is given it’s due respect; here in Seattle and over in Madison, Indiana. (considering the weather in indiana i’m glad i live here) 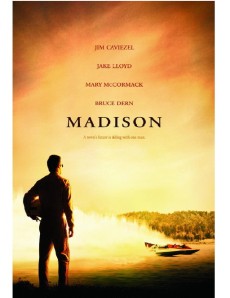 Madison even has it's own Hydro MOVIE. C'mon Seattle, get with it!

Granted there are other places that enjoy the Hydros and some even have a decently long history hosting races, but Madison and Seattle have Hydroplane racing sewn tightly into their community spirits. Most of the drivers and crews have considered one or the other their homes and both have sponsored Hydroplanes; the Miss Seattle was originally the Slo-Mo-Shun V, and the current ‘Miss Madison’ is the Oh Boy! Oberto boat (Oberto Sausage Co is a near century old Seattle-based company) which won the Seafair races this year. Although Seattle doesn’t currently sponsor a boat, while here the boats are staged in the Stan Sayres pits.

And we have Chip Hanauer, too.

Bill Muncey was the man. He was “Mr Unlimited”; rough and raw and driven to win. And win he did. Until his death at a world championship in Alcapulco in 1981 he racked up 62 wins and 8 Gold Cups – a seemingly insurmountable record. 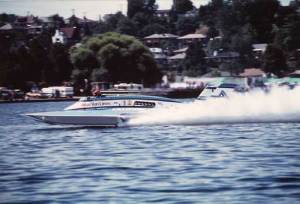 Hanauer took over where Muncey left off in the Atlas Van Lines, and except for the ability to win, the similarities pretty much ended there.

Chip Hanauer is a slight and soft-spoken man – just a nice guy who holds a door for you or stops and waves you into his lane in traffic. Not big, not loud, just a regular guy. (i’ve seen him around town a few times over the years, including a Frank Lloyd Wright exhibition many moons ago, and he’s pretty personable. but i digress…kinda) His driving is much the same; smooth, solid, effortless. You noticed him, though, because he was in front alot of the time. 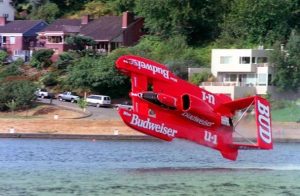 Even when he wasn’t running the fastest or best boat, he was always in contention when the Finals came around for the day, and when the points were tallied for the season.

When he finally retired from racing, Hanauer had 61 wins. Some contend he didn’t want to equal or break Muncey’s 62-win record, and that may be true, but Chip did leave the game with 11 Gold Cups – three more than Bill.

Chip still does appearances and charity work around Seattle and is a perennial commentator for the Seafair Hydro races.

For a great gallivant through the history of Hydroplane racing in Seattle the place to go (besides the pits on seafair sunday) is the Hydroplane and Raceboat Museum just south of the city. It is stuffed full with historic pictures, articles, and tons of information on past and present Hydroplanes, drivers and events.

2 responses to “Thunder on the Lake – Seattle Hydroplane Racing”