Our Menageries and Other Northwest Species

I grew up in a household full of animals. Sure, there was an abundance of dogs and cats – even a canary and a couple of turtles (of the red-eared variety) – but most of what padded, scrabbled, and flew through the house were not your standard issue pets. 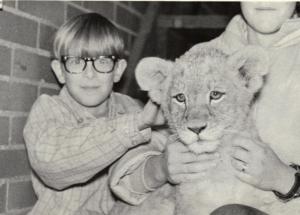 Me and a Lion cub sitting on the stairs at the newly built Children's area of the Woodland Park Zoo. Published in the WPZ newsletter "Zoonews" ca 1967

If you go by sheer numbers, then it would be a close call between mice and squirrels. If you measure by unusualness, then the Red Fox squirrel or carnivorous beetles would fall toward the top of the list. If you include, uh, not live animals, then the 8-foot python (in the freezer) and Giant Red Kangaroo (autopsied in the garage) would take honors.

My mother was called ‘The Animal Lady’ by folks in the neighborhood. Both parents were docents (plus) at the Woodland Park Zoo for years and I got to know many of the Zoo’s denizens as well as other local “exotic” animals. I counted a cougar by the name of Loki among my friends. (He stayed with a lady who also had Servils and Civit cats.) I walked along with Bamboo the elephant when she took a walk around the Zoo. (she was ‘a toddler’ at the time and barely stood 6-foot at the shoulder.)

My original 2 mice (Antony and Cleopatra, btw) spawned a colony of mice of a couple hundred at any one time. (we supplied WPZ with treats for the Owls and Snakes when the colony would get too large) Through selective breeding we got albino mice with dark eyes, and dark mice with pink eyes. My mother was even able to breed a strain that got a specific skin cancer every other generation and bred true. Those went to Fred Hutchinson Cancer Research Center. Now that was something around the homestead. This was back in the late 60’s and early 70’s and this showed a genetic link to a form of cancer. It wasn’t until 1980 that I finally read a paper in Scientific American about the Oncogene – something my mother had proven 10 years before, working in a little shed in the back of the garage.

I was a lucky kid.

One of the few photos of the PNW Tree Octopus

For all the Raccoons and Opossums and Squirrels that shared our domicile through the years, there were a few fascinating Northwest denizens that didn’t pass though those portals. One was the local Tree Octopus.

The Pacific Northwest Tree Octopus lives in the rain forests of Washington’s Olympic Peninsula. Rarely leaving it’s coniferous cozy, the PNW Tree Octopus makes the arduous journey to the Hood canal only to mate, and it’s likely because of this formidable expedition (and it’s shyness) that we never took in one of the arboreal cephalopods.

Building around the greater Seattle area continues to boom and the resulting growth has effectively cut off many of the migration paths of the Octopus between the Olympic National Forest and the waters of the Hood Canal. This, coupled with predation by Cats, Eagles, and Sasquatch, has resulted in a greatly reduced breeding population and is threatening it’s extinction.

There is always speculation about ‘pockets’ of  PNW Tree Octopi living in or around the Seattle area proper, in fact there has been sightings reported at our neighborhood Carkeek Park. The hypothesis is that the Octopuses hitch ‘rides’ on harvested Xmas trees and, being highly intelligent, are reputed to have hidden deep within the tree’s boughs until given the chance to escape, sometimes stealing the harvester’s vehicle to hasten their departure.

Despite their seriously depleted numbers, there are still very few ways to show your support and help alleviate the plight of these cedar-sitting cephalopods. Fortunately, there is a rather direct manner in which you can help. As explained at the ZPi blog:

If you must give money to ease your conscience, donations to help the Tree Octopus should be given directly to the Tree Octopuses. Here is how to donate: Travel to the Olympic Peninsula (if you are a minor, ask your parents first). Stand in the Tree Octopuses’ forest near a tree and hold out a dollar bill. If you stand still enough, eventually a Tree Octopus will come by on a branch, reach out, and take the bill with her suckers. She will continue to return for more bills as long as you hold them out, so bring lots of singles. She will use them to line her den in the trees, as the bills will soak up rain water and keep her skin moist. Given the current value of the dollar, this is the most cost effective way to help.

Please note: don’t give them coins. While they are attracted to shiny objects and will gladly take coins, the toxic metals in coins (especially copper) can easily absorb into their skin and poison them. Paper money, checks, stock certificates, coupons, etc. are preferable and make better nesting material.

So please, do what you can for this endangered animal and, while you’re here, buy expensive things from our Washington state gift shops. In the words of Emmett Watson; Keep Washington Green – Spend Money then Go Home…

2 responses to “Our Menageries and Other Northwest Species”